In the past, my artistic practice consisted of primarily working in 2-D collage. My current work with cardboard boxes, however, was sparked by a cross media class I took at the Corcoran/GWU while working on my Masters. The professor encouraged us to experiment with a variety of media and to fully explore the true nature and meaning of materials. I was drawn to cardboard because it is so commonplace, yet the multiple layers consist of smooth and textured board that intrigued me, as well as the variety of natural tones inherent in the plain boxes.

“A box is basically a geometric shape with the ability to hold, house or conceal something – or not. Initially, my main concern was to transform these plain cardboard boxes into something else and at the same time draw attention to questions of our consumer habits and larger environmental issues.”

One aspect of my installation consist of large floor sculptures created from basic brown cardboard boxes that have been torn, twisted, folded and peeled to reveal multiple layers.My intent was to examine my consumer spending and draw attention to issues of consumerism and waste in western culture. Many questions came to mind as I worked on these pieces including: what do the items you value and consume on a regular basis say about who you are, the society you live in, and our culture? Also as an artist, how can I transform a fairly mundane object into something else? 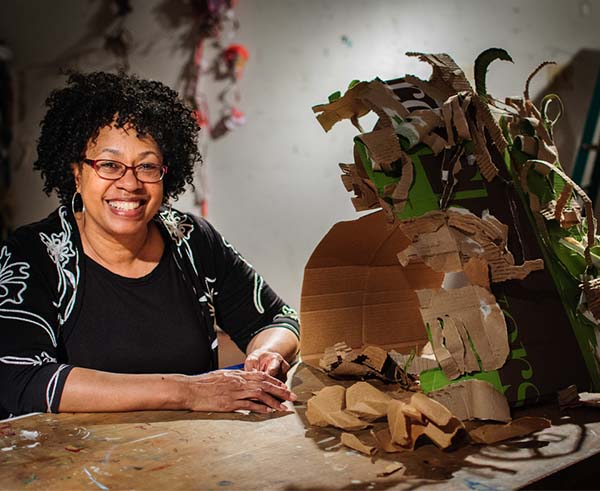 Each of these brown artifacts was produced from a single cardboard box with the exception of one bright orange floor construction that was made from multiple shoe boxes. The colorful wall-hung sculptures were produced from primarily shoe boxes, either cut or torn into linear constructions. In many, several boxes were combined. Shadows play on the wall behind them. Many have a skeletal feel, reminiscent of an excavation. I tried to maintain the integrity of the object by refraining from using adhesives and fasteners as much as possible. I worked as a packaging designer for large corporations across the country, including Mattel Toys, Campbell Soup and at one point even Barnum and Bailey Circus. I spent so many years designing detailed, elaborate packaging for a variety of foods and objects of play. I think it’s interesting that now I’m focusing on the opposite – the deconstruction of consumer packaging in my art practice.

“rise + fall: new works by Adjoa Burrowes and Lendeh Sherman” will remain on view through December 4th, 2015 at the Betty Mae Kramer Gallery.