Today we are featuring Jeff Struewing, the winner of the 2014 Volunteer Award for his work with Lumina Studio Theatre. As a volunteer with Lumina for over nine years, Jeff has become a regular backstage fixture.  He devotes his time and care to finding props that will help make Lumina’s theatrical productions the very best they can be, contributing memorable and eye catching props to each production.  Every prop Jeff finds, he provides to Lumina free of cost (!!), allowing them to save resources for other production expenses.  His dedication is truly inspiring!
Reserve your ticket today and join us on Monday, October 20 at 7 pm as we honor Jeff, and many others, at the 2014 Montgomery County Executive’s Awards for Excellence in the Arts in Humanities. 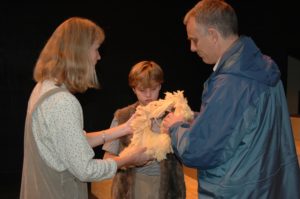 Jeff Struewing: My son’s  first show with a large role was my first show doing props – Midsummer Night’s Dream – and what a show it was.  It was set in a French Cafe with beautiful music, some sung in Flemish.  We went through gallons of Cool Whip (yes, Cool Whip) because the couples get into their tussles by having massive cream pie fights, with seltzer water to boot.


As the show came to a close, with the little kids singing as they sat around an accordion player and the glitter falling from the sky, I was incredibly moved and knew I was involved with something special.
“I am a scientist and have worked at NIH for over 20 years. I had never set foot on a stage before and had no idea what “theater magic” was, but after that show, there was no doubt in my mind: theater was magical and I was hooked.” 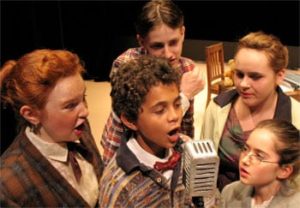 David Minton (Executive and Artistic director) and Jillian Raye (Artistic Director and Founder) expect a lot of the actors and it is amazing to see how they respond.  My son continued for several more years, having larger and larger roles.  Basically, I saw him grow up at the Black Box in Silver Spring.  I continued with props and supporting the productions in any way I could.  When my son finished at Lumina, I was torn about whether to continue. But one more year was followed by another, and 5 years after my son’s last performance, I am still at it!  I just love getting to know the kids and see them grow into amazing young adults. It is truly a privilege to witness.

“Being part of Lumina has really opened my eyes to the arts.  I am experiencing most of these Shakespearean and other classic works for the first time in my life. ” The language is so beautiful, and I learn as much as the kids do when David and the other directors explain what is going on and how to convey the meaning. I am in awe at what young high school kids can do –tons of original Shakespeare lines that they nail every time.  The costumes are fantastic, the sets are so clever and professional, the music is usually live, and the sound and makeup are great as well.


Lumina has grown and matured a lot over the past decade.  It is a treasure for the community.  I feel very lucky to live in Silver Spring and Montgomery County where there is such a vibrant arts community.  It is easy to pour your heart and soul into something that everyone else is so dedicated to as well.

Sometimes during “hell week” it can be exhausting and I have more than once asked myself if I should step back and hand it over to someone else –after all, none of my children are involved anymore and the time commitment is significant. But then something will happen that makes me know it is worth it. One such time happened late one night during hell week when I told myself that this was my last production. –I had a rough day and was tired and anxious to get home.  Then, out of the blue, one of the actors whom I had not interacted with a lot over the years spontaneously thanked me for everything I did for them, and I just about collapsed.


We don’t always know the impact we have on people or how important a kind word can be, so I try to keep that in mind and acknowledge what other people do for me. In receiving this award, I hope that David, Jillian, Julie, and absolutely everyone involved in Lumina know how much I appreciate the support they have given me.  My life is so much more enriched for having been part of such a wonderful organization.