So I am back at the Arts and Humanities Council after a month-long stint in Ireland, visiting family and just getting in touch with those fleeting cultural roots that can sometimes be a struggle to get in touch with. That, essentially, is what Montgomery Traditions here at AHCMC is all about. And as a preface to our upcoming segment on Irish folk arts in Montgomery County, I thought I’d share a little piece about my experiences there. 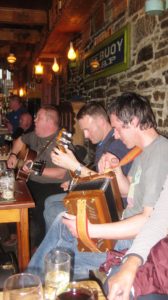 For someone interning for an organization that tries to expand one-dimensional perceptions about other countries and cultures, Ireland can be a little frustrating. Because a lot (and I mean a lot) of my experiences could have passed as travel brochures published by the Irish Bureau of Tourism (unsure if that is a real institution). Folksy landladies really do offer you tea at your bed and breakfast that looks over a verdant green countryside. Some places really do seem to have more cows than people, and possibly more pubs than cows. And those pubs, much more often than not, will have traditional Irish music sessions playing in them from as early as 4:00pm to as late as 2 in the morning.
That, though, was hands down my favorite part. Some of the best music I’ve heard in my life I stumbled upon when all I had been looking for was a place to have a pint. While sessions are certainly not impromptu, they’re not advertised or even booked ahead. While some took place on a small stage, the majority of players sat on barstools or at tables, stopping intermittently to sip at their drinks as if they were simply patrons of the bar like everyone else. The bands don’t tour or sell tickets; they don’t even have names (though one of them really liked that I kept calling everything “super baller”, an Americanism which I retrospectively feel a little ashamed of bringing overseas, even more so when they decided they’d use it as their band name). The music itself isn’t really the point; its the atmosphere that music engenders, the way it makes people feel as they listen to it, and creates a small community out of a room full of strangers. It’s a pretty excellent phenomenon, and it’s probably what I miss the most about Ireland. 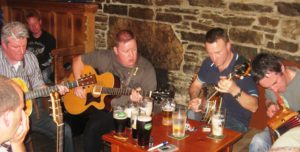 But as our upcoming segment on Irish music will reveal, its not something you need to travel all the way to Ireland for. There is a thriving community of Irish musicians in Montgomery County, and you only need to go as far as McGinty’s Pub in Silver Spring to find Irish music sessions of the caliber I saw during my trip. It’s something definitely worth seeing for yourself.