As part of the AHCMC survey of public art, not only have we located missing artworks, we have rediscovered works in plain sight.  In 1987, Potomac Library acquired a free-standing sculpture by Raya Bodnarchuk for the library’s entry as part of the County’s Art in Architecture program. This sculpture, which is untitled, is made of carved and pigmented wood, and depicts an early Potomac woman, a dog, and a stack of books.
Over the years, the sculpture became a powerful folkloric emblem for the library and a bit of challenge for the under-age set. Situated at the front of the library, the sculpture attracted young climbers ready to scale their own Mount Everest. Eventually librarians relocated the sculpture to a quieter spot near the stacks. 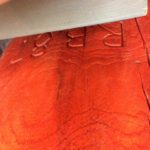 At the time Bodnarchuk received this commission, she was an artist in residence at Glen Echo Park and an instructor at the Corcoran School of Art, where she continues to teach. The County actually owns another sculptural work by Bodnarchuk–Animals of Forest Glen–at a pedestrian bridge along Georgia Avenue which can be found in the Public Art Directory.  Four prints are included in the County’s Works on Paper collection.
Some of Bodnarchuk’s works on paper will be featured in the upcoming exhibition, Bookmarks, scheduled to open at the Kramer Gallery on Oct. 8th with a reception open to the public on Oct. 11th.