In curating “Community Reflections,” I had the pleasure of spending time with Cynthia Farrell Johnson

, one of the featured artists. We had a rambling conversation that touched on the role of the artist in society, the connections between Cynthia’s travels as a U.S. diplomat and her art, the things that inspire her, and her plans for the future.
We often gain a perspective on our own culture when traveling abroad, and Cynthia observed that in many of the places she lived in Central America and Africa artists were much more influential and involved in the public policy debates of the countries.
“It was interesting,” Cynthia mused, “to learn how revered writers, and poets, and painters and musicians were in other cultures and in other countries, whereas here in the United States it is seen p 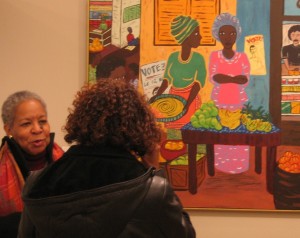 urely as entertainment….The role that the public intellectual plays here seems to me to be a bit different than the role they play in Latin America or Africa.”
“Why, do you think that is the case?” I asked.
We agreed that history is partly responsible, as Neil Harris argued in his 1966 seminal volume, “The Artist in American Society.” Deeply rooted cultural values are hard to transform. The country’s founders viewed art as a luxury and artists as marginal, so it is not surprising, that even today, Cynthia perceived marked differences in the role of the artist in society here and abroad.
To learn more about Cynthia Farrell Johnson and her work, click on this icon: