By Tammi Gardner, Theatre
On the first day of classes, my students walked into the Creative Kids classroom and saw a big square made from blue tape in the middle of the room and exclaimed, “This room is completely empty!” And I replied, “That’s because we are going fill it up with our IMAGINATION!”
And as promised over the next three weeks, we have managed to: 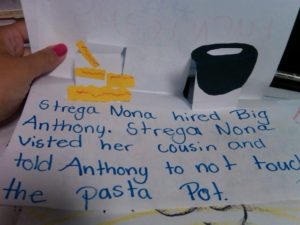 All by using our 5 Acting Tools and Skills:  Imagination, Concentration, Cooperation, our Bodies and our Voice.
As we continued the Creative Kids Program into its third week of the ELO-Care Program, each class has shined in different aspects of the program curriculum and are preparing for their final performance on Thursday, June 28.
The Green Group (2nd/3rd graders) were awesome at retelling stories and acting them out.  They were able to use their imaginations not only to create the characters but inanimate objects also came alive and became a part of our story enactment.  By cooperating and working together, they made a wonderful environmental orchestra providing the background sounds for our stories too!  They will be enacting their favorite story, “Jimmy Zangwow’s Out Of This World Moon Pie Adventure” as their final performance piece and leading the entire ELO-Care student body in a moving, yet silly warm-up!
While the Baseball Group (3rd/4th graders) excelled at writing their own extension stories and even wrote a story called “Smelly Business” – that told of the  antics of Big Anthony when he takes Strega Nona’s magic perfume and grows a heap of trouble – and made it into a book to send to children in a homeless shelter.  They will be performing their own hip extension story based off “Tacky the Penguin” called, “Wacky Tacky Meets the New Girl in Town.”
The Basketball Group (4th/5th graders) focused more of how the 6 Pillars of Characters were represented or applied in each of our stories.  As growing young people, they quickly learned the effects words and actions – even when given by friends – can affect people and hurt them.  As their final performance, two students will be hosting a live “talk show” (based off the story “Why Mosquitoes Buzz in People’s Ears”) to interview animals (played by the other students)  accused of the terrible crime of killing a baby owlet, so that “…Mother Owl won’t wake the Sun so the day will come.”  The hosts will help each animal determine their part in the tragedy and what they – using the 6 Pillars – could have done differently to have prevented it.
What a trip!  If only we had a few more – just imagine where else we could go!